On the edge of 86,000 acres of protected forest and with endless beaches, Portobelo and the neighboring national park have much to offer those passionate about conservation, diving and the outdoors. Visitors come for the food, for the Afro-Caribbean lifestyle and the watersports. Divers will enjoy exploring the myriad of underwater sites: sixteen significant dive sites are scattered off Portobelo's coast, including a sunken C-45 twin engine plane and massive cargo ship. To experience the city in a different way, visit in October for the lively Festival de Cristo Negro, a national, spiritual celebration of one of the region's most honored symbols.

The friendly Cuna Indians live quietly on these primitive islands off Panama's Caribbean coast. The arrival of visitors to their home is still a special occasion for these isolated island dwellers. They are happy to be photographed in their colorful attire, for perhaps a small tip. Bargain for one of their fancifully designed handmade embroideries called molas.

Cartagena is full of history and charm. At La Popa Monastery, you will have a panoramic view of the city and harbor. Enjoy the artisan center of Las Bovedas (The Dungeons), Plaza Bolivar, the Palace of Inquisition and the Church of San Pedro Claver, and shop for Colombian emeralds - the finest in the world.

Santa Marta is the cultural and historic center of Columbia's Sierra Nevada region. Be sure to visit the unspoiled beaches of the Parque Nacional Tayrona.

Curacao's capital of Willemstad is lined with colorful Dutch buildings and offers some of the best shopping in all the Caribbean. At the foot of Queen Emma Bridge lies the well-preserved 18th century Fort Amsterdam. Nearby is the floating Shon Sha Capriles Kade Market, selling fresh fruits and vegetables. Also in town is the Jewish Historical and Cultural Museum. Just outside the city is the Curacao Museum displaying Caiquetio Indian relics and a colonial kitchen. Other sites include Botanical Garden and Zoo, Amstel Brewery and Curacao Distillery. For those who long to soak up the sun, the beaches on this island are spectacular.

Tossed like a tiny emerald among the Grenadines' 100 islands is Mayreau. In this idyllic spot there are no cars, just one tiny village and one resort, hidden away
in the palms.

A lush volcanic island, just 18 miles north to south and 11 miles wide, St. Vincent's windward coast is lined with cliffs and rocky shores pounded by the Atlantic ocean. The leeward coast has spectacular slopes and valleys running down to beaches lapped by the tranquil Caribbean Sea. The Capital, Kingstown, combines reminders of its colonial past with the bright and bustling life of a modern market town.

Pigeon Island is located in the north of St Lucia. It is drier, with thorn scrub and cactus, and is home to colonies of seabirds. St Lucia is an independent island in the south-eastern Caribbean Sea, one of the Windward Islands close to Barbados, Martinique and St Vincent.

Soufriere is a town and port on the east coast of St Lucia. Mountainous St Lucia's tapestry of lush hillslopes and plantation-filled valleys lend an exotic backdrop to the brightly-painted buildings of this small fishing community dominated by one of the Caribbean's most photographed landmarks, the volcanic coneshaped peaks of the Pitons rearing vertically skywards from the sea. Explore the steaming crater of what is billed as the world's only 'drive-in' volcano and test Soufriere's hot sulphur baths amid the rainforest. Further sights are to be seen at Diamond Falls and Mineral Baths where you can walk the gardens and take a dip in the pool under the waterfalls - and don’t forget those unspoiled golden beaches. 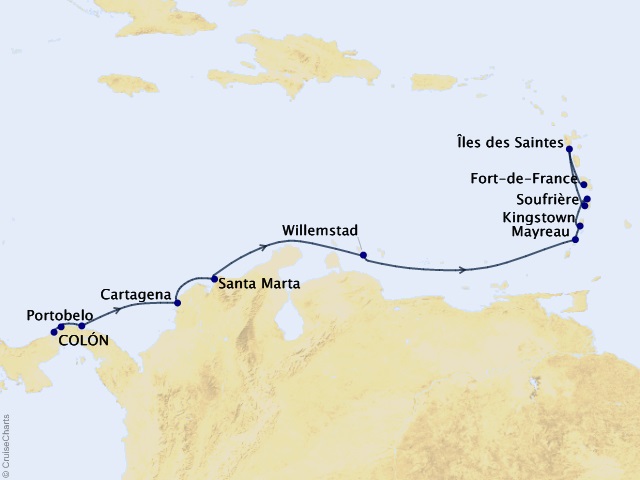 All prices per person and in USD unless otherwise stated.
Offer ID:
1477864