An independent nation located 2,000 miles south of Japan, the Republic of Palau is best-known for their “Rock Islands,” a small cluster of mushroom-shaped islets located in a large lagoon that harbors one of the world’s greatest concentrations of corals, fish, and other marine life. The beauty of this 400-mile-long archipelago has given rise to resorts and aquatic activities. Enjoy the tropical splendor of the mangrove and coconut palm forests as you relax in their secluded and idyllic shade.

Guam, a territory of the United States, is the largest and southernmost of the Mariana Islands in the north-western Pacific Ocean. It is 30 mi long and about 8 mi wide. The northern portion of this tropical island is a plateau of coral formation; the southern portion is hilly and of volcanic origin. Good anchorage is in Apra Harbour, on the western coast and the capital, Agana, is to the north. Guam is one of the principal US defense fortifications in the western Pacific Ocean and is the site of extensive naval, army, and air force installations.

Chuuk is one of four island states which comprise the Federated States of Micronesia. Beneath the blue waters is a submerged museum of World War 2 wrecks, for there are more than 60 ships of the Japanese wartime fleet encrusted with corals lying at various depths. The lagoon has been declared a monument. Chuuk is one of two top scuba diving locations in the world. Weno has the best views of the lagoon and its sheltered waters. Chuuk's State Centre on Weno is where visitors can experience a taste of island life by visiting the local stores jammed with everything from kerosene stoves to ladies wear and handicraft. Climb into the old light house built during the Japanese occupation and visit the Blue Lagoon Resort for a stroll in the coconut palm grounds with splendid views across the water to Dublon Island formerly the Japanese Military Headquarters. On Sapoli, overgrown vegetation partly conceals the remains a city, while at Fefan, craftsman carve Chuukese lovesticks - exotic souvenirs.

The island of Butaritari is one of the larger atolls in the Gilberts chain of Kiribati in the Pacific Ocean. The island is best known for being where Robert Louis Stevenson lived in the late nineteenth century. With a large lagoon and surrounded by wide reef, Butaritari is a hidden gem for scuba diving and snorkeling.

This tiny island, only one square mile in size, was settled by Englishman William Marsters in 1863, and its population of 50 are all descendants of him and his three Polynesian wives. Olde English – with a distinct Gloucestershire accent – is still spoken on the island.

Tahitians believe Raiatea to be the sacred birthplace of their gods and their religious and cultural beginnings. The most important and well-preserved religious site in all of Polynesia is here. It is from these shores that ancient Polynesian explorers are said to have ventured to the far off lands of Hawaii and New Zealand. Second only in size to the Island of Tahiti, Raiatea is today the trading center of the leeward islands. Raiatea is unique in that it has the only navigable river in Polynesia - the Faaroa. The rare, white gardenia called Tiare Apetahi only grows on the slopes of Mount Temehani and nowhere else on Earth! Mount Temehani is also the supposed birthplace of Oro, one principal god of Polynesia. There is a large, protected lagoon around Raiatea and its sister island Tahaa, which produces wonderful beaches and the perfect location for sailing, big game fishing, and diving.

There is a large, protected lagoon around Raiatea and its sister island Taha'a, which produces wonderful beaches and the perfect location for sailing, big game fishing, and diving. Tahaa is only accessible by boat and has little tourism activity, although it affords visitors ideal spots to picnic, dive and hike. It also grows about 80 percent of all the vanilla in Polynesia.

Papeete, the modern and bustling capital of Tahiti and Her Islands, contains
government offices, Gendarmerie, hospitals and clinics, banks and many other
services dedicated to serving the population of the islands as well as tourists
who come for a life-enriching experience to these magical islands.

Papeete, the modern and bustling capital of Tahiti and Her Islands, contains
government offices, Gendarmerie, hospitals and clinics, banks and many other
services dedicated to serving the population of the islands as well as tourists
who come for a life-enriching experience to these magical islands. 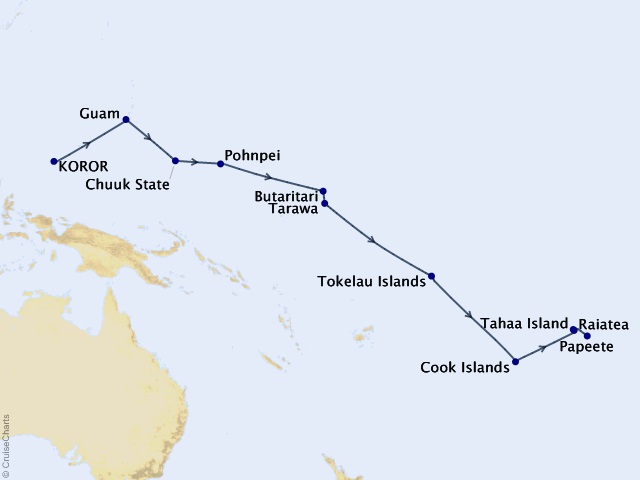 Prices are per person and include cabin fare, taxes, fees, excursions and all meals while onboard.  Airfare is available at an additional charge unless otherwise stated.

Cost Includes: All accommodations aboard ships or in hotels per itinerary or similar, all meals and nonalcoholic beverages aboard ship, meals on land as indicated, air transportation whe