Originally a fort built by the U.S. Army in 1838, during the Second Seminole War, Ft. Lauderdale has little left of its warlike past. Instead the city welcomes visitors with broad beaches and an easy pace of life, plus convenient air and water connections that make the city a perfect place to visit.

The capital of Tobago, Scarborough, is also one of its busiest tourist destinations. While visiting the city, see the historical Fort King George which was built in the 1780’s as a British colonial outpost. And what town would be complete without an open-air market? At the Scarborough Market, shop with the locals for fruits, vegetables, livestock and other goods.

In addition to being site of France's satellite launching base, French Guiana is perhaps best known for the infamous penal colony to which convicts and undesirables were deported from France. For a long time the small archipelago (the Safety Islands) was known by the name of "Devil's Island." The three islands - Devil's Island, Ile Royale and Ile St. Joseph - are about one hour by boat from the mainland. Their notorious convict settlements were built in 1852. On the almost inaccessible Devil's Island, political prisoners like Alfred Dreyfus were held in isolation. The prisoner who became most famous was doubtless Henri Charrière, who was immortalized in the movie "Papillon" for supposedly being the only convict who managed to escape from "the Green Hell." Of 80,000 prisoners sent to the islands, some 50,000 died here. Visit the prison ruins or the Kourou Space Centre.

Many travelers begin their Amazon experience in Manaus, Brazil. Others begin at the "end of the line", in Belém or Macapa, where the Amazon flows into the Atlantic Ocean.

Turning out of the muddy Amazon is the blue Rio Tapajos and the village of Alter do Chao. Tour the Center for Preservation of Indigenous Arts, with displays on the lifestyles of local tribes. Or cross to a white sand beach for a refreshing swim in the clear river waters.

Boca Da Valeria is a remote little Indian community, set at the entrance of the Valeria river on a 400ft hill overlooking the Amazon River and is reached by zodiac or tender. It is located between Parintins and Santarem. Calls allow exploration of the jungle in quest of monkeys, butterflies and the colourful birdlife, - and the opportunity to buy wooden carvings and gourd masks, and see something of the, simple traditional lifestyle of the villagers.

Manaus (Amazon River)
1/14/2024 8:00:00 AM
1/14/2024 5:00:00 PM
The capital of the State of Amazonas, the belle époque splendor of Manaus is still evident in the graceful mansions and the Teatro Amazonas opera house. This city, resting on the Rio Negro, was created by the rubber boom of the mid-19th-century, when steam navigation opened up the Amazon to entrepreneurs and the social elite. Today, stroll down the Parisian-styled boulevards and Italian piazzas, or watch the fisherman at Municipal Market unload their catch of the day on the river’s edge.
Parintins (Amazon River)
1/15/2024 10:00:00 AM
1/15/2024 6:00:00 PM

The little Indian village of Parintins lies beside the river on Tupinambarana Island, amid the largest archipelago of the Lower Amazon. The community can trace its history back through two centuries and still proudly celebrates its traditional Indian culture. On a shore visit you will be entertained at a special recreation of the villagers' annual 'Boi Bumba' festival, featuring some truly spectacular costumes and unique traditional music.

Today, Santarem is one of the Amazon’s most important trading centers, and is rich in legend and nature. The town is situated at the point where the Tapajos and the Amazon waters meet. This is called the “Wedding of the waters” and is one of Santarem’s major attractions. The lakes and forests of this area are home to numerous species of birds, particularly the white egret.

A lively blend of French and English cultures, St. George's has steep hills to climb, spectacular views to photograph and a rum distillery to tour. St George's has one of the prettiest harbour settings in the Caribbean. Tourist infrastructure is still generally small-scale and locally owned and offers a good balance between comfort and price, making Grenada a great getaway for those who want to avoid the resort experience.

Curacao's capital of Willemstad is lined with colorful Dutch buildings and offers some of the best shopping in all the Caribbean. At the foot of Queen Emma Bridge lies the well-preserved 18th century Fort Amsterdam. Nearby is the floating Shon Sha Capriles Kade Market, selling fresh fruits and vegetables. Also in town is the Jewish Historical and Cultural Museum. Just outside the city is the Curacao Museum displaying Caiquetio Indian relics and a colonial kitchen. Other sites include Botanical Garden and Zoo, Amstel Brewery and Curacao Distillery. For those who long to soak up the sun, the beaches on this island are spectacular.

Linking the Atlantic to the Pacific, the Panama Canal provides one of cruising's most unforgettable experiences. Over 10 years were needed to complete the canal's 51 miles in 1914 - so avoiding the lengthy and often dangerous voyage around Cape Horn. 'The Big Ditch' lifts vessels by a fascinating feat of mechanics aided by on-shore 'mule' locomotives through three great locks, traversing man-made lakes, channels blasted through rock, and the dense jungle. Two other special highlights of the canal are Gatun Lake and the Gaillard cut. Gatun Lake is one of the world's largest man-made lakes covering 163 square miles. Gaillard Cut is an 8 mile channel built through solid rock which was the most difficult excavation in the canal construction.

Microclimates characterize Costa Rica, but in a nation of verdant rain forest, the region around Quepos, on Coronado Bay is one of the richest and most bio-diverse places on earth. Its unspoiled natural beauty has secretly drawn visitors for decades and a cottage tourism industry has arisen to accommodate city-dwellers seeking a glimpse of the planet's vanishing wilds. Try to visit the Mangroves, rainforest and Manuel Antonio National Park where you can se howler monkeys, two and three toed sloths, crocodiles and iguanas.

You'll experience the Big Island's contrasts for yourself in the lush tropical port of Hilo. Hilo has an annual rainfall of more than 100", earning it the title of America's Wettest City. The result is some of the most spectacular flower gardens, waterfalls and rainbows anywhere in the world. Visit Volcanoes National Park/Kalapana Gardens, Waterfalls of Hilo, Hawaii Tropical Botanical Garden, Formations of Pele by Helicopter, Hawaiian Eco-Adventure & Snorkel, Mauna Kea and more.

This famous area of the Big Island is on the western side along the coast North Kona and South Kona. Kailua-Kona is the name of the main town along the coast, with Kona added to distinguish it from other Kailuas. This tourist-oriented seaside village is at the base of 8,271 foot Mt Kaulalai. The main drag is Alii Dr, over a mile of oceanfront shops and restaurants. The newer Waterfront Row complex is at the southern end of the tourist strip. It is a shopping and dining complex. There is a seawall along the waterfront that is popular with fishermen and locals who weave hats and mats for tourists. There is the Kailua Pier where marlin are weighed in tournaments. Most big game fish are landed at Honokohau Harbor.

Guam, a territory of the United States, is the largest and southernmost of the Mariana Islands in the north-western Pacific Ocean. It is 30 mi long and about 8 mi wide. The northern portion of this tropical island is a plateau of coral formation; the southern portion is hilly and of volcanic origin. Good anchorage is in Apra Harbour, on the western coast and the capital, Agana, is to the north. Guam is one of the principal US defense fortifications in the western Pacific Ocean and is the site of extensive naval, army, and air force installations.

Ishigaki Island is the main island of the Yaeyama Islands. The island offers visitors calm beaches, snorkeling, and diving in the surrounding coral reefs.  Visitors can also explore the jungle like scenery around the rivers by taking a river kayak tour. At Tamatorizaki Observation point the platform offers lovely views of the cape.  Ishigaki also has the highest mountain in the region, which afford visitors great hiking trails throughout the island's hilly interior.

Naha is the port for Okinawa Island lying southwest of the main Japanese islands. Landmarks in the city include the Commodore Perry Memorial, the 16th-century Sogen-ji Ishimon Gates and Tsuboya pottery quarter. Explore Shuri the 500 year old former capital that contains various shrines, temples and ceremonial gates including the famous Shurei Gate. The island, tropical and encircled by coral reefs, also houses Japan's largest sub tropical park (Okinawa Memorial Park) that includes an Aquarium, Museum and amusement park. It is also possible to visit the Okinawa Battle Sites and a number of war memorials recording the American victory in 1945.

Naha is the port for Okinawa Island lying southwest of the main Japanese islands. Landmarks in the city include the Commodore Perry Memorial, the 16th-century Sogen-ji Ishimon Gates and Tsuboya pottery quarter. Explore Shuri the 500 year old former capital that contains various shrines, temples and ceremonial gates including the famous Shurei Gate. The island, tropical and encircled by coral reefs, also houses Japan's largest sub tropical park (Okinawa Memorial Park) that includes an Aquarium, Museum and amusement park. It is also possible to visit the Okinawa Battle Sites and a number of war memorials recording the American victory in 1945.

Huge department stores brim with shoppers, neon flashes from dusk to dawn, and the entire world pays heed to the slightest fluctuation on the Nikkei Index. From the Imperial Palace and Meiji Shrine to the fabled Ginza district, 20th-century Tokyo is an intriguing composite of East and West. Yuppies sporting Walkmen bow formally in greeting. Women in kimonos and Dior suits stroll side-by-side. Geishas play samisens while disc jockeys play the Top Forty. Japanese houses of wood and paper stand in the shadow of towering steel and mortar. Not far away, one of the world's most impressive sights soars 12,388 feet to its snow-clad peak: Mount Fuji, the majestic symbol of Japan. 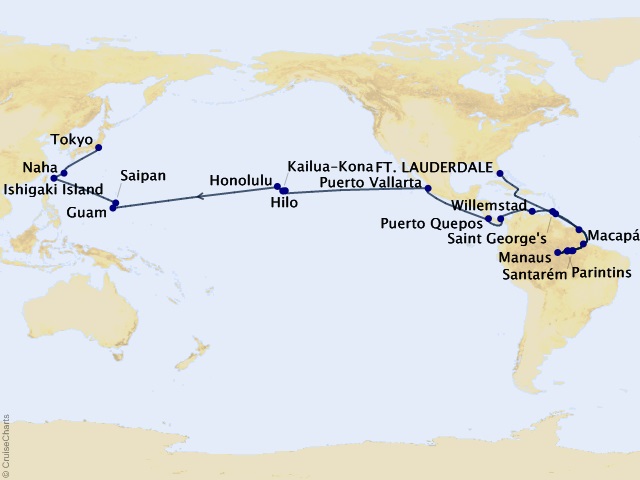 Rates are cruise only, per person, based on double occupancy. Taxes, Fees and Port Expenses additional for all guests. Fuel surcharges may apply. Please ask your travel counselor for details. Rates are subject to availability and may change without notice. Restrictions may apply.

Prices are per person, based on double occupancy. Airfare, transfers, Taxes, Fees and Port Expenses additional.

All prices per person and in USD unless otherwise stated.
Offer ID:
1454493