Santo Domingo is considered to be the oldest city in the New World, where the settlement of all the Americas began. It is the home of the the first cathedral and the first hospital. Wander down cobble stone streets among the Spanish colonial architecture and imagine how things were back in the 1600s.

Considered by many Dominicans and visitors alike to be the prettiest part of the Dominican Republic, the Samana Peninsula is a naturalist's delight! Unspoiled white-sandy beaches, coconut-covered mountains, clear mountain streams winding through lush, tropical rain forests, vibrant coral reefs, internationally known whale-watching and many other attractions, a vacation of adventure is awaiting your discovery. From the twin capes of Rincon Bay in Las Galeras to Playa Bonita in Las Terrenas to Los Haitises National Park across the bay from Sanchez to Samaná in the heart of the peninsula, the sights and sounds of this tropical paradise will remain forever, haunting memories and tempting visitor time and time again to return."You may leave Samaná, but Samaná will never leave you".

Enjoy the fabulous underwater world of the British Virgin Islands. For those who wish to get wet and enjoy the thrill of viewing coral formation and other marine life without diving, you can take a professionally guided snorkel tour of the famous Norman Island underwater sea caves and the Indian Reef. Cruise along Sir Francis Drake Channel to Spanish Town, Virgin Gorda. Or take a short drive to the baths at Spring Bay for swimming, snorkeling and sunning amid the mammoth boulders and sea caves for which the area is well known. The only viewing gear you need are your eyes!

Located on the Southeast Peninsula, South Friar's Bay is a great swimming beach with a long stretch of golden sand and calm waters. This Caribbean beach, which is a favorite for both tourists and locals, is perfect for watersports, especially snorkeling. It is also a great spot for a beach picnic or party. South Friar's Bay is home to Godfather's, Sunset and Shipwreck Beach Bars - which provide refreshments for all visitors.

There was never any hope of lucrative sugar plantations in St.Barths. It was too dry, too steep, too rocky, and, finally, too small. Unsuitable for agriculture, the island was never coveted as a prize during the colonial wars of the 18th century. The place had a serviceable harbor, and this allowed the town that grew around it, Gustavia, to play a key role in that intermittent conflict, a role that was to presage much of its future. Overflowing warehouses surrounded a harbor packed with ships from many nations, and a mercantile and architectural tradition was established that has lingered to the present day. Today, Gustavia has adjusted itself to satisfy the increasing number of visiting tourists. Restaurants, boutiques, and gift shops now line streets once busy with merchants, merchant seamen, and adventurers.

With a beach for each day of the year, Antigua is a water-lover's delight. For shopping and feasting on local seafood, the capital city of St. John's offers many choices on Redcliffe Quay. Or motor around the coast to historic English Harbour, a superb restoration of the 18th century dockyard where Admiral Lord Nelson once ruled the British fleet.

Deshaies is a beautiful island commune in the French region of Lesser Antilles. The beaches are are very popular here and excellent for swimming. The Botanical park is also a highlight of the island. Additionally, residents keep up a small handcraft industry, and wooden souvenirs can be purchased in shops.

Portsmouth gives access to the island of Dominica. Travel from Portsmouth into the island's exotic tropical interior - which soars to over 4000 feet and discover a wonderful environment of dense (and now protected) rainforest, rich flora and fauna, deep lakes, glittering waterfalls and fast-flowing rivers quite unlike any of its neighbours. Or visit Roseau, the other town on the island. 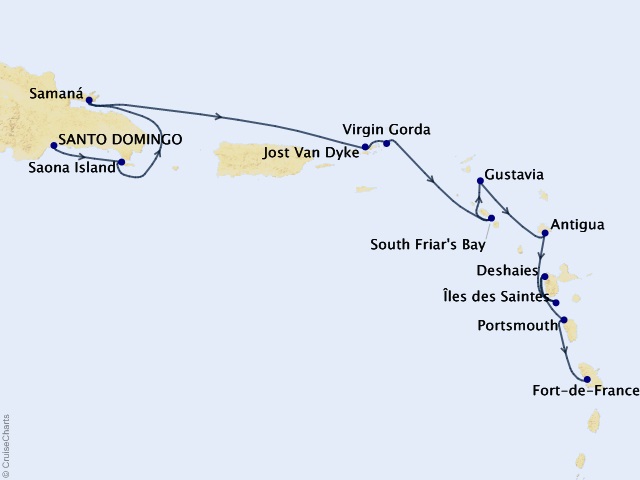 All prices per person and in USD unless otherwise stated.
Offer ID:
1446919