One of the most complex of the many fjords on this coast, it is also one of the largest, 40 kilometres in length and eight kilometres wide at its widest point. To the north of its mouth is the large Resolution Island, whose Five Fingers Peninsula shelters the mouth of the sound from the northwest. along the east coast of the island, Acheron passage connects Dusky Sound with Breaksea Sound, to the north.

Several large islands lie is the sound, notably Anchor Island, Long Island, and Cooper Island. The upper reaches of the sound are steep-sided, and the high precipitation of the region leads to hundreds of waterfalls cascading into the sound during the rainy season. Seals and dolphins are often sighted in the sound's waters. The Seaforth River is the largest of many small rivers and creeks which flow into the sound.

Doubtful Sound is a remote, unspoilt wilderness of many moods: one minute clear, blue and sun-drenched, the next, mist-shrouded and mysterious. When you discover Doubtful Sound you will be struck by its silence -- a silence broken only by bird song, maybe the sound of a fish leaping or the rushing of a distant waterfall.

Located 20 miles from mainland New Zealand, Stewart Island’s attractions lie in its virtually untouched beauty and unhurried pace. To the Maori people who have lived on the island for hundreds of years, the island is known as Rakiura, meaning “heavenly glow”. The majority of the approximately 360 permanent residents live at Halfmoon Bay (or Oban), the island’s only sizeable settlement. This fishing settlement borders a scenic bay, with low buildings blending into forested hills behind. The village has a few shops, one hotel and a couple of cafes. Stewart Island is mountainous and heavily forested, with steep wooded promontories rising sharply from clear waters. Ninety percent of the island is national park and most of that is native forest.

Port Chalmers is an attractive historic town and modern container port located on a tiny peninsula seven miles from Dunedin. It features magnificent harbour views, fine 19th century buildings and a thriving artistic community. It was originally founded in 1844 as the port for Dunedin. From here you can also visit Olveston stately home, Otago Peninsula (Larnach Castle and Albatross colony), and the Taieri Gorge Railway.

Few places in the world can boast of such natural wonders as those offered by land and sea in Kaikoura .... stunning coastal alpine scenery, year-round whale watching, dolphin and seal swimming, pelagic bird watching, fishing, diving, and a host of eco-tourism oriented activities!

The twin cities of Napier and Hastings, located within the region of Hawke's Bay on the East Coast of new Zealand's North Island, are quite unique. The area is blessed with a Californian-Mediterranean climate, boasting one of the highest sunshine averages in the country. The area is also dotted with colourful vineyards and orchards, with some of the most fertile farmland you will see.
In 1931 a two and a half minute earthquake destroyed the city of Napier. Rebuilding began almost immediately in the architectural style of the time - Art Deco. Napier is now classed as the newest city in the world, offering a marvellous, world-renown, collection of Art Deco buildings. Among the attractions in the area are the Gannet Colony at Cape Kidnappers, the Hawke's Bay Aquarium, the Spanish Mission and Art Deco architecture, gardens and bush walks.

Gisborne is best known as being the first city in the world to greet the sun each day. Located on the sunny East Coast of the North Island, Gisborne has a lot of activities to offer visitors. There are numerous botanical gardens and arboretums to explore. It is also one of New Zealand’s largest grape growing regions and there are several wineries that open their doors to tourists. Or charter a fishing boat and try big game fishing – you might be lucky and catch a marlin.

Rich in legend and history, the Bay of Islands is New Zealand's cradle of European civilization, with many points of interest relating to early European and Maori settlement. There are many "firsts" associated with the Bay of Islands, such as the first European community, the oldest home and church in the country and the first capital of New Zealand, among others. Reserves have been established to protect what is left of the once vast native kauri forests with magnificent trees rivaling California's redwoods. Major sites in the Islands include historical Waitangi, Paihia, a subtropical marine resort popular as a starting point for bay cruises and fishing excursions, and Russell, one of the oldest towns in New Zealand known as the “Hell Hole of the Pacific”. Anglers still regard the Bay of Islands as a top fishing area, while residents cherish its unhurried pace, balmy climate and serenity. Other sights include Motukako Island, Kawhiti Caves, Maori Meeting House, and the Bay of Islands Maritime and Historic Park.

Auckland is regularly voted one of the best lifestyle cities in the world, with the cosmopolitan city centre complemented by great escapes within half an hour of downtown. Indulge in Auckland's shopping, nightlife and unrivalled cuisine and experience some of the many attractions and adventure activities on offer. There is never a shortage of things to do in the City of Sails. Sights to see include Auckland Art Gallery, Auckland Zoo, and Museum of Transport and Technology. 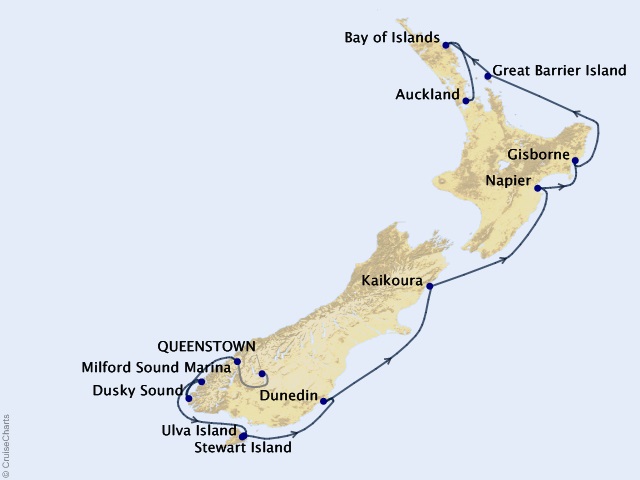 Prices are per person and include cabin fare, taxes, fees, excursions and all meals while onboard.  Airfare is available at an additional charge unless otherwise stated.

Costs Include: All accommodations aboard ships or in hotels per itinerary or similar, all meals , nonalcoholic beverages* aboard ship and meals on land as indicated, air transportation where indic