7-night Gems of Scandinavia and the Low Countries Cruise

Choose ONE of the options below.

Wonderful Copenhagen is a city of bridge-spanned canals, copper-roofed buildings and manicured parks. This famous Baltic seaport is one of Europe’s loveliest capitals and the seat of the oldest monarchy in the world. Copenhagen is a focus for commerce, culture, industry and cosmopolitan atmosphere. The locale of Hans Christian Andersen’s enchanting tale of The Little Mermaid, Copenhagen is known as Denmark’s fairy-tale city. Its impressive theaters, museums and churches are of interest to many visitors; the best-loved attractions include the world-famous Tivoli Gardens, the Langelinie Harbor with its Little Mermaid statue and the busy shopping promenade known as Strøget.

Copenhagen Walking tour in the pursuit of Hygge – 4 Hours

Copenhagen Sustainable boat tour- you are the captain! - 3 Hours

Historical Spa and visit to the Cistern of Copenhagen – 4 hours

Lined by woods and beaches, Aarhus (Arhus) invites you to enjoy its many attractions. Best known and treasured is probably the open-air museum ``the Old Town'' with more than 60 half-timbered houses, all carefully removed from their original sites throughout the country and restored here. The Prehistoric Museum of Moesgaard contains ethnographical and archaeological collections. Old Aarhus has narrow streets and alleys where many old houses converted into art shops, pottery workshops, galleries and cafes. Aarhus is the city where the Danish Royal family spends many holidays. With a magnificent view of the Park, Bay of Aarhus, and Marselisborg Woods the site is one of the best in Denmark. Aarhus has a rich cultural life all year. The beautiful Concert Hall adds new dimensions to the wide choice of cultural events. Aarhus is above all the City of Music.

Located at the mouth of the Göta River, Gothenburg (Goteborg), Sweden’s second largest city, is the busiest port in Scandinavia and one of Sweden’s prettiest and friendliest cities. Its town center, crisscrossed by canals, allows pedestrians to enjoy many traffic-free streets. Cultural events include the National Orchestra of Sweden at the Concert Hall or opera and ballet at the Opera House. The local clubs stage many international and Swedish artists. Shops in the city range from high street chains to exclusive boutiques. Sample one of the best cuisines in Europe. Visit picturesque cafés and sample some of the best food in Europe or visit one of the 17 museums in the city.

Arendal is a small town in the county of Aust-Agder, Norway.  It was originally called the Venice of Scandinavia because the town is built on seven islands, with a network of canals surrounding it. Sailing, riding, canoeing, fishing and other sports are also available here. Arendal is also home to several popular music festivals including the Hove Jazz Festival and Canal Street, a blues and rock restival.

Cosmopolitan Amsterdam is most famous for its narrow, gabled houses lining the canals. Interesting attractions include the medieval weighhouse, Royal Palace on Dam Square, and New Church. Its most glamorous industry is the diamond trade. Not too far from Amsterdam are the flower centers of Aalsmeer, the picturesque fishing villages of Volendam and Marken, cheese markets at Edam and Gouda, and historic Haarlem, the main center of the bulb-growing industry. Enjoy the city’s sights from a glass-topped sightseeing boat which passes characteristic gabled houses and negotiates picturesque arched bridges. Facing Dam Square, the Royal Palace was built in 1648 and is still officially the royal residence, although the royal family resides in The Hague. The marbled Citizens Hall with inlaid maps of the world is worth seeing. One of Amsterdam’s most visited sites is historic Anne Frank House. Rijksmuseum, the city’s most prestigious museum, houses the largest collection of Dutch paintings in the world. Van Gogh Museum houses a striking collection.

Amsterdam: An Introduction to Amsterdam – 4 hours

Zeebrugge is an important port city in Flanders, connecting Belgium’s intricate railway and canal transportation systems. It is the gateway to medieval Bruges, one of northern Europe's most picturesque old cities and Brussels with its tree-shaded boulevards, splendid parks, imposing monuments, and beautiful buildings.

The white cliffs of Dover are famous in song and story. From Dover you can visit nearby Canterbury or take a full-day excursion to see the sights of London, Westminster Abbey, Trafalgar Square, Big Ben, Buckingham Palace and more. 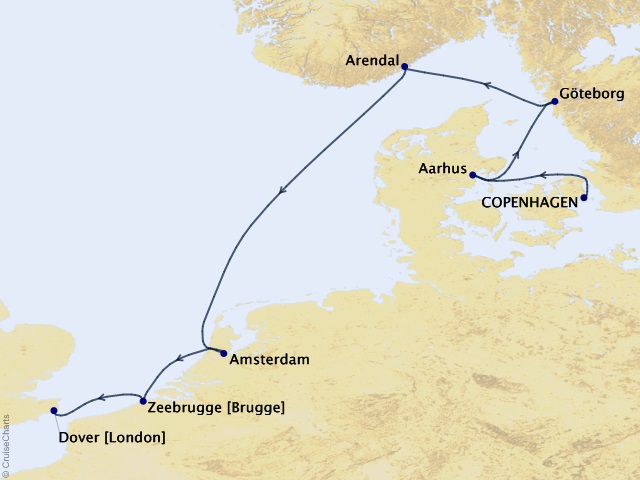 Prices are per person, based on double occupancy. Airfare, transfers, government fees and taxes are additional unless otherwise noted.

All prices per person and in USD unless otherwise stated.
Offer ID:
1432595