*Amenities are not combinable with other special offers and may not apply to all fares shown. Additional restrictions apply.

Note: Receive an additional $50 per Couple Shipboard Credit for bookings named and deposited more than six months prior to departure and booked with the Groups Standard Rate.

30% Savings Off Cruise Fare for Every Guest

Barcelona, the self-confident and progressive capital of Spain, is a tremendous place to be. Though it boasts outstanding Gothic and Art Nouveau buildings, and some great museums – most notably those dedicated to Picasso and Catalan art – it is above all a place where there's enjoyment simply in walking the streets, stopping in at bars and cafés, drinking in the atmosphere. A thriving port and the most prosperous commercial centre in Spain, it has a sophistication and cultural dynamism way ahead of the rest of the country. In part this reflects the city's proximity to France, whose influence is apparent in the elegant boulevards and imaginative cooking. But Barcelona has also evolved an individual and eclectic cultural identity, most perfectly and eccentrically expressed in the architecture of Antoni Gaudí. Scattered as Barcelona's main sights may be, the greatest concentration of interest is around the old town (La Ciutat Vella). These cramped streets above the harbor are easily manageable, and far more enjoyable, on foot. Start, as everyone else does, with the Ramblas.

Barcelona: Walking Tour of the Gothic and Jewish Quarters

Barcelona: Tour of the Gaudi Houses

Marseille is a vibrant, cosmopolitan port in the Provence region of France. Craggy mountains provide a spectacular backdrop. As a Mediterranean melting pot, the port virtually rubs shoulders with intimate, picturesque old harbor, the Vieux Port. Packed with watercrafts, this is the heart of Marseille. Two fortresses guard the harbor: Fort Saint Nicolas and Fort Saint Jean. Several vantage points offer spectacular views, including the impressive Basilica Notre Dame de la Garde - a prominent landmark overlooking the city that is crowned by a monumental, gilded statue of Virgin Mary. Marseille boasts numerous fine museums well worth a visit. Sitting at one of the many outside cafes or strolling the streets of the old port area lets you experience the unpretentious charm of this city. Other sights include Chateau d'If - a 16th century fortress-turned-prison; Basilica St-Victor - Marseille's oldest church with the appearance of a fortress; and La Canebiere - a broad boulevard with everything from hotels to cafes and shops.

Nice is undoubtedly the place for the opening up of art and culture. The Côte d'Azur has inspired, from time immemorial, the greatest painters, writers and musicians. It has compelled recognition of its avant-garde across the Atlantic, its museums are holding prestigious collections in edifices of renowned architecture. Nice is full of an extraordinary artistic and cultural heritage. The gentle way of life sustains the imaginary world of artists and stimulates their creativeness. A cultural and aesthetic atmosphere prevails here; the cultural life is intense. It is punctuated by temporary exhibitions in the museums and the municipal galleries, by the programming of the theatres of which the most important is the Theatre of Nice - National Dramatic Centre - directed by Jacques Weber. The Opera House of Nice's Theatre proposes events of great quality.

With its dizzying mix of old and new, of sophistication and squalor, Genoa (Genova) is as multilayered as the hills it clings to. It was and is a port city: an important maritime center for the Roman Empire, boyhood home of Christopher Columbus (whose restored house stands near a section of medieval wall), and one of the largest, wealthiest cities of Renaissance Europe. Capture glimpses of Genoa's former glory days in Genoa's portside Old Town, where treasure-filled palaces and fine marble churches stand next to laundry-draped tenements. Life within the old medieval walls doesn't seem to have changed since the days when Genovese ships set sail to launch raids on the Venetians, crusaders embarked for the Holy Land, and Garibaldi shipped out to invade Sicily in the 19th-century struggle to unify Italy. Modern Genoa, which stretches for miles along the coast and climbs hills, is a city of international business, peaceful parks, and breezy belvederes from which visitors can enjoy fine views of this colorful metropolis and the sea which defines its identity.

Picturesquely situated in a narrow cove on Italy's northern coast lies enchanting Portofino. This Pearl of the Mediterranean has been a favored gathering place for the elite who appreciate the charm and intimacy of the cliff-lined harbor. Overlooking rocky coastline, quaint Portofino surprises with incredible views of Gulf of Rapallo and surrounding hillsides. The church of San Giorgio offers a beautiful view of the resort and harbor. More extensive views are available from Fortezza de San Giorgio. In 1935, the city government of Genoa declared Portofino a national monument. Visitors enjoy the unique ambiance, chic boutiques and quaint cafes that overlook the small yacht harbor and line narrow, cobbled streets. Others explore the surrounding coastline, where tiny villages are tucked away in hidden coves. Don't miss out on a favorite pastime - people-watching while relaxing in an outdoor cafe. The boutiques and designer shops tempt with chic resortwear and Italian designer clothing. Two miles from Portofino is Paraggi, with a sparkling cove good for a swim.

Livorno serves as a convenient gateway to Tuscany - which is known for classic landscapes and lush vineyards. Visitors come to see great art centers of Florence, Lucca and Pisa - where names like Michelangelo, Machiavelli, Boticelli, da Vinci, Donatello and Dante come to mind. Pisa is known for its brilliant monuments, which include the 11th-century Cathedral, the Baptistery and the leaning Bell Tower. Lucca is one of the most handsome Romanesque cities in Europe. Its historic center features several fine old churches and lovely squares. Lucca is also known as home of composer Giacomo Puccini, whose birthplace is now a museum. Walking in the historic center, shopping in its elegant stores and enjoying a meal of renowned Tuscan cuisine are some highlights of this area. Downtown Livorno has a fine local market and a variety of fine shops and restaurants. Sights include the 14th-century Loggia della Signoria assembly hall in Florence; the Uffizi Gallery, which houses one of the world's famed museums and the Accademia best-known for Michelangelo's sculptures.

Customize your Fragrance in Florence

Civitavecchia is the port city for Rome. Rome has always been and remains the Eternal City. With its splendid churches, ancient monuments and palaces, spacious parks, tree-lined boulevards, fountains, outdoor cafés and elegant shops, Rome is one of the world’s most attractive cities. Among the most famous monuments is the Colosseum where spectators watched combats between muscled gladiators and ferocious animals. Stop to see the remains of the Forum, once a political and commercial center. Rome’s squares were enhanced with such imposing structures as the Vittorio Emanuele Monument and grandiose fountains like the Fontana di Trevi. Awe at Christendom’s most magnificent church, the Sistine Chapel. The busy square Piazza Venezia is easily recognized by its imposing Vittorio Emanuele II Monument. Take a stroll to Rome's famous Trevi Fountain. Vatican City is the site of lovely St. Peter's Square and St. Peter's Basilica, where for 200 years, Renaissance masters worked on its design and created an unparalleled masterpiece. Visit Vatican Museum.

Painting with Caravaggio for Kids 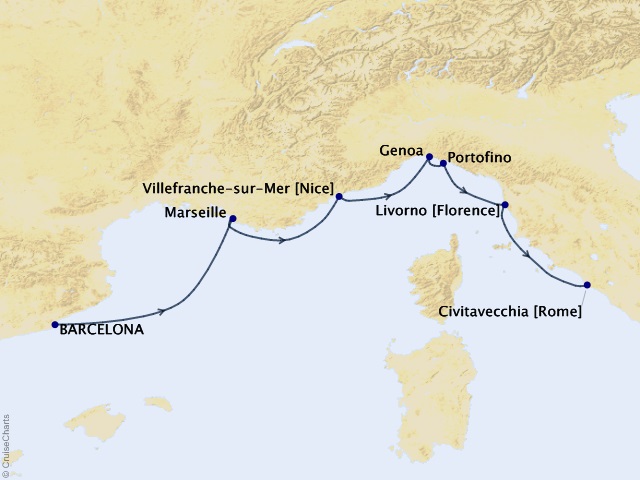 Rates are cruise only, per person, based on double occupancy. Taxes, Fees and Port Expenses additional for all guests (unless otherwise stated). Rates are subject to availability and may change without notice. Restrictions may apply.

Departure Date:
7/3/2023
Number of Nights
7
Cruise Inclusions:
Available Addons:
Optional Roundtrip airfare from your city
Optional shore excursions
Remarks:
Prices are per person, based on double occupancy. Airfare, Taxes, Fees and Port Expenses are additional for all guests. Pricing for 3rd and 4th guests are available upon request and are subject to stateroom category availability. Prices change frequently

All prices per person and in USD unless otherwise stated.
Offer ID:
1466621