Piraeus is the seaport for Athens, the capital of western civilization, which boasts a fantastic mix of classical ruins and vivacious modern life. Climb the hill of Acropolis to wonder at the Parthenon, join the lively Athenians in Constitution Square, and find a welcoming taverna for spirited bizouki music, plenty of ouzo to drink, and energetic Greek dancing. Piraeus is the largest harbor in the country. The white chapel of St. George at its summit has a theater bearing the same name. The hill of Nymphs is the site of a planetarium, which is located above magnificent Thesseio temple. Among all of these hills, Acropolis is the one that glorified Athens and the whole Greek world and became the symbol of the western civilization. Bays and small rocky or sandy coves dot the area and during the summer are filled with Athenians and foreigners enjoying their beauty.

Santorini is everything that has made the Greek islands legendary. The world famous island of Santorini is the southern most island of the Cycladic group in the Aegean Sea, and is located north of Crete. Its population is distributed among thirteen villages and just exceeds nine thousand. The marvelous dry climate and unbroken sunshine create year around conditions which are perfect for observation, photographs and videos under an extraordinary variety of natural lights and colors.

Iraklion is the biggest city in Crete (and fifth in Greece) with a population in excess of 120000. It concentrates most of the economical activity of the island, and is the main port of entry to Crete for the majority of visitors.

History is very much alive in Iraklion just like in most Greek cities. The central square while surrounded by cafes, stores and restaurants, is dominated by the fountain of the Lions, built by Morozini the venetian governor in 1628.

The Town Hall, is today housed in the Venetian Loggia, a building from the same era.


Koubes
At the end of the central market is a coffee house, housed at the "Koubes" a fountain built by the Turks when they converted the nearby church of the Saviour to the Valide mosque. All around the old part of the city ,a visitor can walk following the old Venetian walls that meet at a bastion, called "Koules", that dominates the old harbour of the city.

Situated on a beautiful peninsula, Bodrum is known as a popular holiday resort. Enchanting villages of white painted houses trimmed with purple bougainvillea together with miles of sandy beaches and ideal locations for water sports. On the southern coast of the peninsula lie the golden sandy beaches at Bardakci, Gumbet, Bitez, Ortakent Yalisi, Karaincir, Bagla and Akyarlar, while on the western side are Gumusluk, Yalikavak and Turgut Reis.
For those who want seclusion, the northern coast boasts Turkbuku, Golkoy and Gundogan - all small simple fishing villages, ideal for those who want a subdued and relaxing atmosphere. While the nights in Bodrum town itself are noisy, crowded and vital, these smaller villages offer cozy taverns and restaurants over-looking quiet bays and can all be reached easily by car or even by boat.

This sun-drenched Mediterranean town on the Turkish Riviera is a major resort with a beautiful crescent bay, dramatic cliffs, and jagged mountains. It is an attractive city with shady palm-lined boulevards and a prize-winning marina. In picturesque old quarter, narrow streets and old wooden houses huddle against ancient city walls. Antalya's visitors come see the old town with its picturesque harbor and excellent Archaeological Museum. Its outstanding exhibits provide fascinating glimpses into the life of the region. In the surrounding area are additional attractions such as Aspendos, Perge and Side. Their remains of antiquity are considered among the most impressive sites. Visit Hadrian's Gate and Main Square, which with its landmark clock tower offers views of the bay and distant mountain peaks. Karatay Medrese (Theological College) exemplifies the best of Seljuk stone carving. Ataturk Museum features a collection of interesting memorabilia commemorating the founder of Turkey.

Antalya: The Greco-Roman Heritage of Antalya, Perge & Side - 7 hours

Every night people celebrate events momentous and trivial. Explore Limassol Castle, which contains the Cyprus Medieval Museum, or the Folk Art Museum, housed in an old mansion. Walk ten miles of beautiful beaches, known as Cypriot Riviera. Stroll in the sea promenade or visit lush Municipal Gardens. On the coastal road to the east, just after luxurious hotels, you will find Amathus, one of the ancient city kingdoms of Cyprus. See the ruins and take a dip near the site of an ancient port. West of Limassol lies Kolossi Castle, a medieval fortress whose walls contain a tower surrounding living quarters, and an ancient sugar factory. Visit the Kourion archaeological site, an ancient city-kingdom, where you can take in a play or concert at the ancient Greco-Roman Theater, overlooking the blue Mediterranean. And explore a treasure trove of Greek and Roman sites, such as the Sanctuary of Apollo.

Despite the many tourists, Marmaris has managed to retain its charm. Marmaris is in the deep recesses of a pretty bay, framed by pine-clad mountains. The sheltered harbor provides ideal anchorage for boats, which are protected from the stiff breezes out at sea. Secluded coves around Marmaris offer nice beaches with hotels and resorts. Many visitors use Marmaris as a starting point for trips to Caunos, an important ancient city famed for its rock tombs. Attractions include the statue of Kemal Atatürk, founder of the Turkish Republic. Also interesting to see is Menzilhane, an Ottoman version of a pony express station, dating back to the days of Sultan Süleyman the Magnificent, who ordered the station built in 1545. Beyond that, one can spend a lazy day in the sun or join locals and fellow visitors in a waterfront taverna. It's fun to stroll along the palm-lined waterfront promenade. Approximately 10 minutes away are good, sandy beaches, backed by green mountains. The clear waters of the Aegean are ideal for swimming and watersports, including scuba diving offered at Hotel Mares.

Visitors come to Kusadasi for beaches and nearby ruins of Ephesus. The major attraction is the archaeological site of ancient Ephesus, considered to be most important in Turkey. The history of this ancient city dates back to 10th century BC; many remarkable structures seen today are result of an excavation and restoration program. Along a white marble road grooved by ancient chariot wheels, the two-story Library of Celsus presents a striking sight. There are temples, houses of noblemen, and community buildings lining ancient streets. Nestled in the mountainside is a 25,000-seat amphitheater, still used for performances during Festival of Culture and Art. Bible buffs may know Ephesus as inspiration for St. Paul’s Epistle to Ephesians and the site of one of the first seven churches of Asia Minor. Treasures are kept in the Seljuk Archaeological Museum. Among the better-known ancient sites near Kusadasi are ancient Miletus and Dydima. Remains include a well-preserved Roman theater at Miletus and Dydima's sacred temple of Apollo.

Kusadasi: The Greco-Roman City of Ephesus & the Wine-making Village of Sirince - 7 hours

This centuries old capital guards the slender waterway between the Mediterranean and the Black Sea, and is the doorway between the East and West. Visitors can explore remnants of Byzantine Constantinople in the Sultanahmet district, where you will have the chance to see ancient splendors, such as the Haghia Sophia, the Blue Mosque and Topkapi Palace. At night the city boast a lively nightclub scene and excellent Turkish dining options that may include cultural entertainment and dancing. Istanbul also features splendid shopping malls, boutiques, and hand crafted items can be found all over the city.

Istanbul: The 16th Century Masterpieces of Sinan the Architect - 7 hours

This centuries old capital guards the slender waterway between the Mediterranean and the Black Sea, and is the doorway between the East and West. Visitors can explore remnants of Byzantine Constantinople in the Sultanahmet district, where you will have the chance to see ancient splendors, such as the Haghia Sophia, the Blue Mosque and Topkapi Palace. At night the city boast a lively nightclub scene and excellent Turkish dining options that may include cultural entertainment and dancing. Istanbul also features splendid shopping malls, boutiques, and hand crafted items can be found all over the city.

Istanbul: The 16th Century Masterpieces of Sinan the Architect - 7 hours 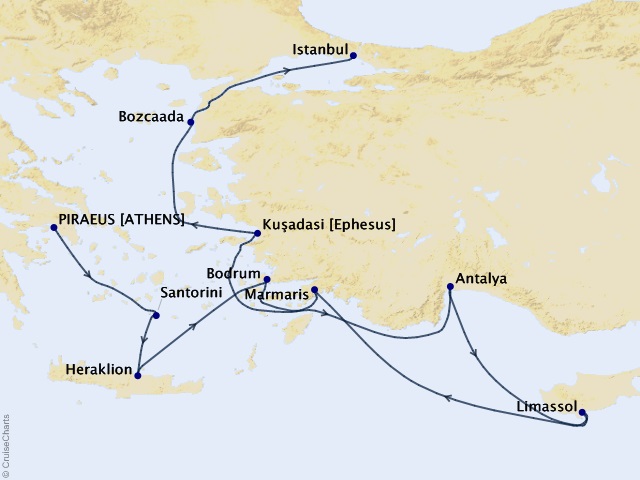 Fares are per person, based on double occupancy and reflect all savings. Cruise-related government fees and taxes are included.

Fares are quoted in U.S. Dollars, are per person and are based on double occupancy. Fares do not include pre-paid charges, personal charges or optional facilities and services fees, as those terms are clearly defined in the Guest Ticket/Contract. Also